Showing posts from September, 2008
Show all

After 5 hours of mind wrenching tension and reams of code later, I've finally been selected for the internship programme at the Microsoft India Development Center (better known as Microsoft IDC ). The internship is going to last for atleast 8 weeks and I'll be getting accomodation for 15 days and travelling expenses in addition to my internship stipend. Looking forward to going to Hyderabad, anybody going to meet me there?
1 comment
Read more 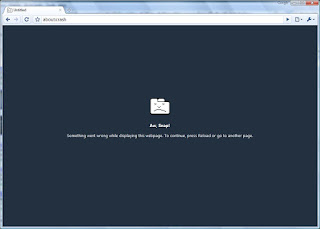 Try typing about:crash in the title bar of Google Chrome and see this cute cross eyed robot! :-) Of course, you do know by now that Chrome is hottest new entrant on the browser block, don't you? Well, now you do. :-D Have a look at this review of Chrome on ZDNet.
Post a Comment
Read more
More posts

Another superb song makes its appearance on the Bollywood scene. Sadi Gali from Tanu Weds Manu is a perfect Punjabi Dance track. Performed by Lehmber Husainpuri from RDB, words aren't sufficient to describe it. Just listening to it makes you want to jump up and start tapping your feet to the music. It's even garnered over a million plays on Youtube. In an effort to make this song's lyrics accessible to the masses, here's the meaning of the song in English paragraph by paragraph. I made it while listening to this song non-stop on loop. Hope you enjoy it!   Kudiyan de vich phir hassdi khed di [Hasdi] x 4 Khed di Ho, gutt di parandi teri naag wangu meldi [Naagawa-] x 4 -ngu meldi Again you're smiling and playing in the midst of girls Ho, Your "gutt da paranda"* resembles the moves of a snake gutt da paranda = An artificial hair extender often worn by Punjabi women to increase the length of their locks. Kudiyan de vich phire hassdi khed di College nu j
Read more

Update: Rohan Rathore and his tragic story is a hoax for sure. This is confirmed. I've talked to my friends at IIT Guwahati and there is no record of such a person ever existing on campus. Nobody at IIT-G knew him and if a person dies in tragic circumstances, nearly everyone in the IIT knows it. The story about Rohan Rathore was created in order to gain views for a video on Youtube. So let us all put the "fake" Rohan Rathore to rest permanently as a person who never existed. Therefore, we can be very sure that the original singer of the song is Gajendra Verma. I'm leaving the original post below for archival purposes. ------ Original Post follows ---- I was introduced to this song by Sanat nearly a month ago and today, after listening to it again on Youtube,  I really felt that I needed to transcribe its lyrics. It's such a soulful song that you can't help feeling sentimental after hearing it - especially since the IITian (Rohan Rathod) who wrote a
Read more

Printing all permutations of a string containing duplicate characters (C/C++)

This is a follow up post to my earlier post on printing all possible permutations of a string (also called Anagrams) using the C++ Standard Library. The earlier post is located here . This post should have come on this blog about 3 years ago. I'm no longer interested in solving problems like this but I wanted to put this up for the millions of people who get this problem in interviews and the like and to retain the same for posterity. So, previously we've discussed how to print all possible permutations of a string without duplicates using the standard C++ library functions. That's all fine and dandy if we want to use the standard libraries – especially next_permutation , but what happens if we have to write our own code to do so? In this blog post I'll present recursive solutions to the problem of printing all the possible permutations of a string. I'll even take up the case where the input string contains repeated letters later on in this post. The resul
Read more